Border closures during the COVID freeze on immigration will wipe $17.9 billion off economic growth by 2025 unless political leaders immediately support initiatives to close the population gap, said Urban Development Institute of Australia.

Migration remains intrinsic to Australia’s history and prosperity. It has helped power our economy, improve our global competitiveness, it supports the growth of new markets, balances our demographic profile, fills knowledge and labour gaps and sustains the tax base. Population growth was at the core of our global record of 28 years of uninterrupted economic growth, until we felt the impacts of COVID lockdowns.

However, the Centre for Population estimates Australia’s population will be 855,200 lower by 2031 than pre-COVID forecasts.

“While Australian Governments took measures to underpin jobs and protect incomes during the pandemic, it doesn’t alter the fact that we have lost two years of positive economic uplift from immigration,“ said Maxwell Shifman, UDIA National President.

“UDIA analysis shows that there is a direct and positive correlation (+0.7) between increases in migrant intake and growth in GDP per capita. Equally, a fall in migration rates puts severe downward pressure on economic growth leading to declining national productivity across all businesses and less jobs,” he added 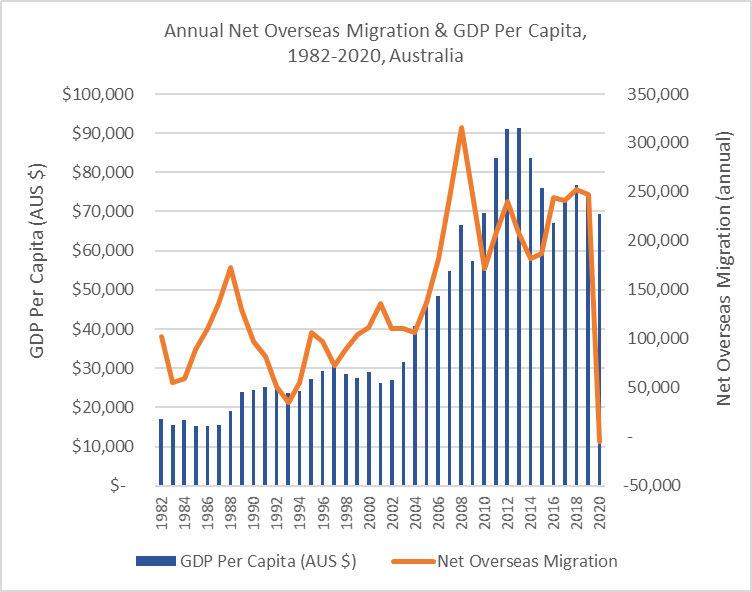 “Net Overseas Migration historically accounts for around 60% of the population growth needed to sustain Australia’s vibrant economy.  The value of migrants to this nation cannot be overestimated,” Mr Shifman said.

The Migration Council of Australia’s report “The Economic Impact of Migration” states that migrants add 15.7 per cent to our workforce participation rate, and 5.9 per cent in GDP per capita growth.

Recent Treasury analysis shows that each permanent migrant contributes $127,000 more to federal and State budgets than the general population over their lifetime. When you consider that immigrants own 1 in 3 small businesses, that’s 620,000 businesses and 1.4 million employees, they are clearly a major contributor to everyday life,” he added.

The report also stated that skill stream migrants are estimated to contribute more to government revenue through taxation than they receive through government services and benefits. The increased diversity that migrants bring plays an important role in helping Australian businesses innovate in the face of intensified global competition and technological change. They also offset Australia’s ageing population, improve labour force participation and productivity, and help businesses to source skills that are difficult to develop at short notice, a challenge that has so obviously presented itself over the pandemic period.

“Australia has temporarily lost the powerful and critical economic boost that immigration brings to the economy. This massive economic hit is only now becoming apparent, and needs to be caught up as quickly as possible to minimise the long term impacts,” said Mr Shifman.

Many industries are already feeling the pressures from worker shortages and the economy will continue to struggle if bold migration targets are not established.

There is no question that Australia must restore its immigration program and consider setting a new population and settlement policy that will give the industry certainty needed to tackle the housing crisis and address emerging labour and skills shortages. 2022 Budget forecasts expect 180,000 new migrants in FY2023 and 213,000 in FY2024, however more should be done to make up for the lost NOM over the pandemic years.

“Ongoing short, medium and long term Government initiatives to recapture strong skilled migration flows and boost population growth are welcome and UDIA is keen to see cooperation from all sides of politics to close the population gap quickly, for Australia’s financial prosperity.”

“But this must come hand in hand with urgent measures to improve housing supply across the country. Population growth is an enormous net positive for the country, and it only becomes an issue when we fail to match expected growth with the homes and infrastructure investment needed to support it,” said Mr Shifman.